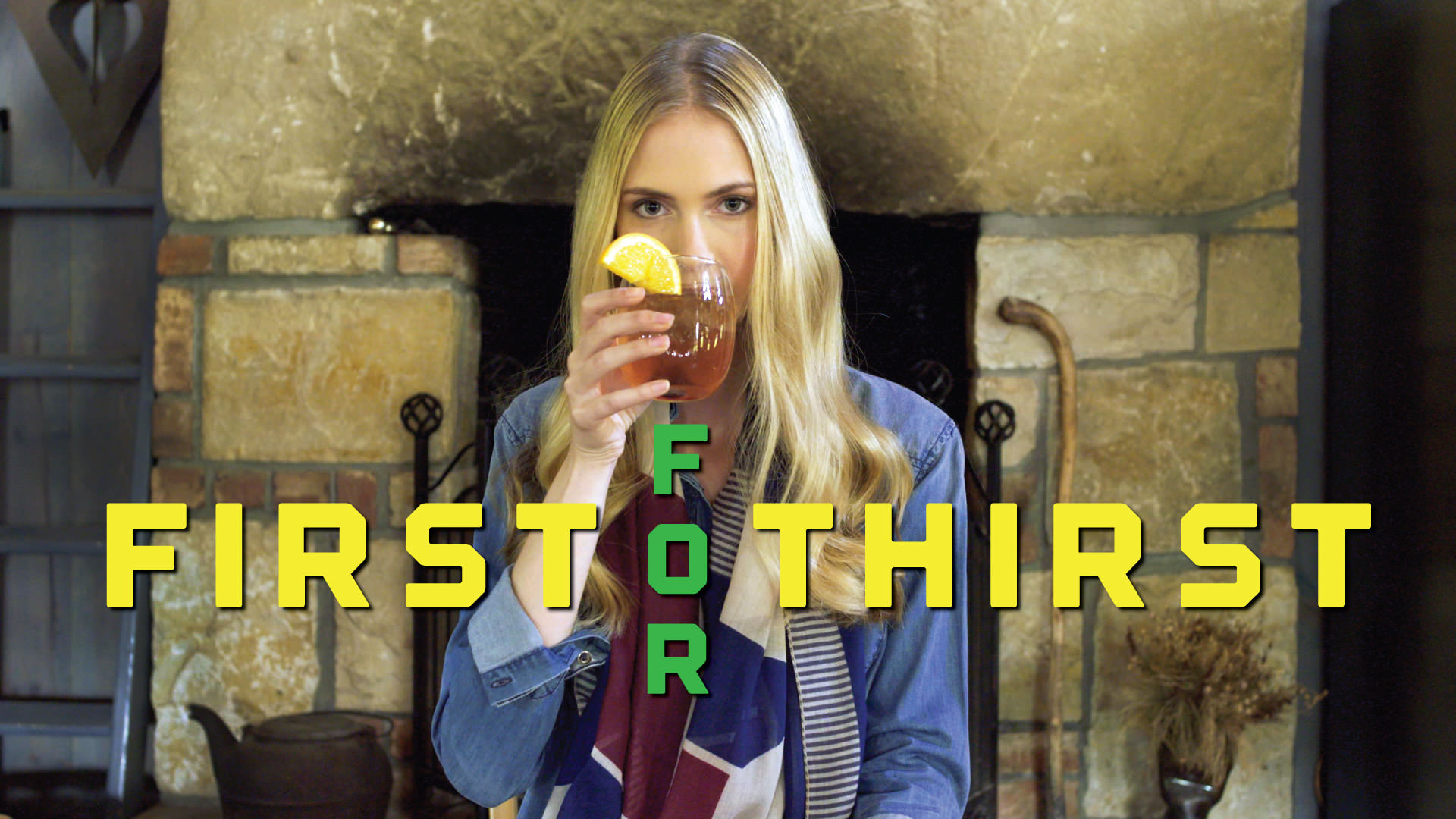 Whether you want to get healthy or let your hair down, think women-owned when you drink.

Who knew happiness could fit in the palm of your hand? Share your dreams with a friend today at drinkdreamin.com 🙌 . . . . . . . #infused #edibles #420 #california #drinkyourmedicine #happy #shareadream #itsalwayssummer #drinkdreamin #californiadreamin #cannabis #high #ganja

If you live in the Golden State, you can enjoy THC-infused sodas from California Dreamin’, founded by former Wall Street-er Amy Ludlum and her partner Peter Bishop, who first concocted a batch for a camping trip with friends. One very empty jar and several happy friends later, they knew they had a hit.   Made with 10 mg of THC, California Dreamin’ sodas provide the same buzz as alcohol — a “light social high” — but without the negative side effects. like a hangover.  The four flavors — Cranberry Apple, Pomegranate, Tangerine, and Grapefruit — are all made with simple fruit juices, providing a healthier alternative to other sodas.

It's a gray day in New England, so create the sun shine indoors! . We're headed to @engineroomct in Mystic, CT, to celebrate happy hour with a Fishers. We couldn't help but pop in next door to @mysticknotwork and feel inspired by their springy daffodil yellow sailor bracelets and monkey fists. ☀️ How are you celebrating happy hour?

While Bryona Shillo was growing up, her family owned the only bar on Fishers Island, NY, a seven-mile island near Connecticut in Long Island Sound.  When she became old enough to tend bar, she enjoyed the craft of mixing drinks.  Each Friday, she’d blend their signature drink — lemonade mixed with premium spirits and honey — in 15 liter batches.  Immensely popular with the summer crowd, it would barely last the weekend.  One night she thought, “What if I canned our lemonade?”  And hence, Fishers Island Lemonade was concocted.  When you enjoy one on a hot summer afternoon, know that you also help to support environmental causes: Fishers Island Lemonade donates a portion of sales to local organizations and has partnered with 1% For The Planet.

Aren't we lucky to be able to explore this beautiful planet? 🌍 Today we celebrate Mother Nature and with a #hint in hand, we head outside! How are you celebrating #EarthDay this year?

Based in San Francisco, Hint Water was founded by Kara Goldin, who wanted to give up diet soda and get healthy, but was bored by plain drinking water.  She began to add slices of fruit (just a hint) into water.  She and her family loved it, and began to look and feel healthier.  Made with zero artificial sweeteners and preservatives, Hint is WHOLE30-approved and is now the #1 independently owned non-alcoholic beverage company in the U.S., featuring nearly 30 flavors, including Blackberry, Watermelon, Cherry, Pineapple, Strawberry-Kiwi, and Crisp Apple.  Hint now has a new kids’ lineup and even its own sunscreen.

Koia Co-Founders Maya French and Dustin Baker met as neighbors, while Dustin — who had experience in medical sales — was trying to a launch cold pressed juice bar business.  Koia Keto contains a complete essential amino acid blend, to support increased lean muscle mass, recovery, growth and maintenance.  They start with a coconut milk base, then blend in a proprietary blend of pea, rice and chickpea proteins (to avoid phytoestrogens), and 14 grams of MCT oil, which provides healthy fats for fuel with no added sugar.  Koia also contains 7 grams of fiber (28% of your daily needs) from chicory root, a prebiotic that promotes the healthy gut bacteria (probiotics) in your system.  Koia is the perfect protein drink for an active lifestyle like Maya’s that includes aerobics, boxing, and strength conditioning twice a week with a personal trainer.

FIND A STORE NEAR YOU  BUY AT AMAZON

Once you see the butterflies, hummingbirds, sea horses, bamboo, and birds of paradise on packaging for LEMONKIND, it’s no surprise to learn that founder Irene Rojas Stanbury is from a long-lineage dedicated to agriculture, fitness, wellness, and business.  LEMONKIND’s teas, juices, and cleanses are made with non-GMO fruits and veggies, vegan protein, and nutrient-rich superfoods like turmeric, chlorella, chia seeds, whole-grain brown rice, Japanese matcha, and Aronia berries.  For every LEMONKIND Tea can purchased, $0.10 cents will go to Many Hopes, to help build build quality homes and schools for children in Kenya, so they can break free from the very causes of their own injustice.  LEMONKIND’s 100% BPA-free pouches are not only shelf-stable; they further its zero waste initiative: Every juice pouch you send back in prepaid envelopes will be turned into beautiful post-consumer recycled products.

Did you know our Organic Chia Beverages contain 2500mg of Omega-3? 💙 Those Omegas help fight inflammation and can improve bone, joint, and eye health 🦴 👁️

Although wee in size, chia seeds are one of the most nutrient-rich foods on the planet, packed withOmega-3s, protein, fiber, calcium, potassium, and more.  Mamma Chia founder and CEO Janie Hoffman fell in love with the magic of chia, adding them to everything in her kitchen and giving away chia treats to everyone she knew.  But it was her chia beverages that became the biggest hit with friends and family.  Chia seeds come from the desert plant Salvia hispanica, and trace back to 3,000 B.C., when it was a staple of both Mayan and Aztec diets.  Chia is also known for its association with the iconic long distance-running Tarahumara Indians of Mexico’s Copper Canyon.  Mamma Chia is a certified B Corporation that is also proud of its affiliations with Green America, 1% For The Planet and Slow Money.

A perfect day to check on The Queens @beeweaverbeegoods

She pitched her business on TV’s “Shark Tank.”  She introduced President Barack Obama at the United States of Women summit.  She formed her own non-profit, Healthy Hive Foundation, to save the honeybee.  And she founded Me & The Bees, ready-to-drink lemonade now buzzing off store shelves in more than 30 states.  She’s Mikaila Ulmer, and she’s 14 years old.  When she was just four and about to compete in a local Lemonade Day competition, two big events happened: Her Great Granny Helen sent an old cookbook that included a special recipe for Flaxseed Lemonade.  And she was stung by a bee.  Mikaila became fascinated with bees and learned what they do for our ecosystem.  She thought, “What if I make something that helps honeybees and uses my Great Granny Helen’s recipe?”  Named one of Time’s 30 Most Influential Teenagers, Ulmer has also been showcased in Teen Vogue, Essence, Good Morning America, and the Today Show.

FIND ME & THE BEES

BEE WELL & PLANT LOVE GIVEAWAY: In honor of Earth Month, we are partnering with some of our favorite brands doing amazing work in the world. This week, we've teamed up with @beekeepers_naturals to offer you a giveaway full of your favorite plant-powered super herb elixirs and bee-powered superfoods. BeeKeeper Natural's partners with institutions to protect these peaceful pollinators and research the Colony Collapse Disorder, which is important because bees play a crucial role in the ecological health of our environment. One winner will receive a variety pack of REBBL Super Herb Elixirs, plus Beekeeper's Naturals' Raspberry Blossom Raw Honey, Cacao Superfood Honey, and Bee Pollen. #HappyEarthMonth 🐝🌿✨ To Enter: 1) Like Post 2) Follow @rebbl and @beekeepers_naturals 3) Tag a BEE-utiful friend (1 tag = 1 entry, unlimited entries) Contest is open to US entries only and closes 4/17! This giveaway is not sponsored by or affiliated with Instagram.

REBBL, which makes coconut milk-based drinks with super-herbs and adaptogen (healing, non-toxic) plants, is led by CEO and Co-Founder Sheryl O’Loughlin.  Inside REBBL’s striking colored bottles are lattes, cold-brewed coffees, and protein elixirs made with all-natural, non-GMO ingredients like Reishi, called the “Divine Mushroom of Immortality” due to its legendary health benefits, including immunity support, Ashwagandha, one of the most important and universally consumed herbs in Ayurveda, and known to support vitality, Schizandra, known as the “Five-Flavor Berry,” to support heart and liver function, and Turmeric, from southeast India, regarded for as one of the most valuable herbs in the human diet.  REBBL’s Co-Founders are Palo Hawken and David Batstone, Founder of Not For Sale, whose mission is to end human trafficking and forced labor.  REBBL donates 2.5% of net sales to support Not For Sale.

Based in Engelwood Cliffs, New Jersey, Remedy Organics was founded by Cindy Kasindorf, a Nutritional Health Counselor guided by the words of Hippocrates from over 2,000 years ago: “Let food be thy medicine and medicine be thy food.”  Its 100% plant based protein blends are certified USDA organic, vegan, gluten-free, dairy-free, and soy-free, and contain probiotics, Ayurvedic herbs, and adaptogen botanicals such as Maca and Ashwagandha that impart strength, energy, stamina, and mental clarity.  They are sold in clear bottles so you can see what is inside.  Remedy Organics is one of a select group of companies in PepsiCo’s Nutrition Greenhouse program, whose mission is to support brands changing the way consumers eat and drink.

Just the right amount of sweet, without the added sugar 🍉

Watermelons are 92% (you guessed it) water.  In 2013, WTRMLN WTR co-founders Jody Levy and Harlan Berger converged two of their interests: sustainability and healthier consumer beverages.  In the food industry, many melons are discarded simply because they are blemished.  By finding a home for these discarded melons, they not only helped farmers turn a loss into a profit; they created a super delicious, amazingly beneficial water naturally rich in electrolytes, perfect for drinking alone or mixing with your favorite spirits for a light and fruity cocktail.  And when Beyonce’s song “Drunk in Love,” with its line “I’ve been drinking watermelon” was released, Levy began sending boxes to the singer, who eventually invested in the brand.  Featured in TIME, Women’s Fitness, Vogue, and Life & Style, WTRMLN WTR provides clean alternatives to traditional, artificial sports drinks, with functional nutrients like L-citrulline, an amino acid that makes your muscles rejoice pre and post workout.