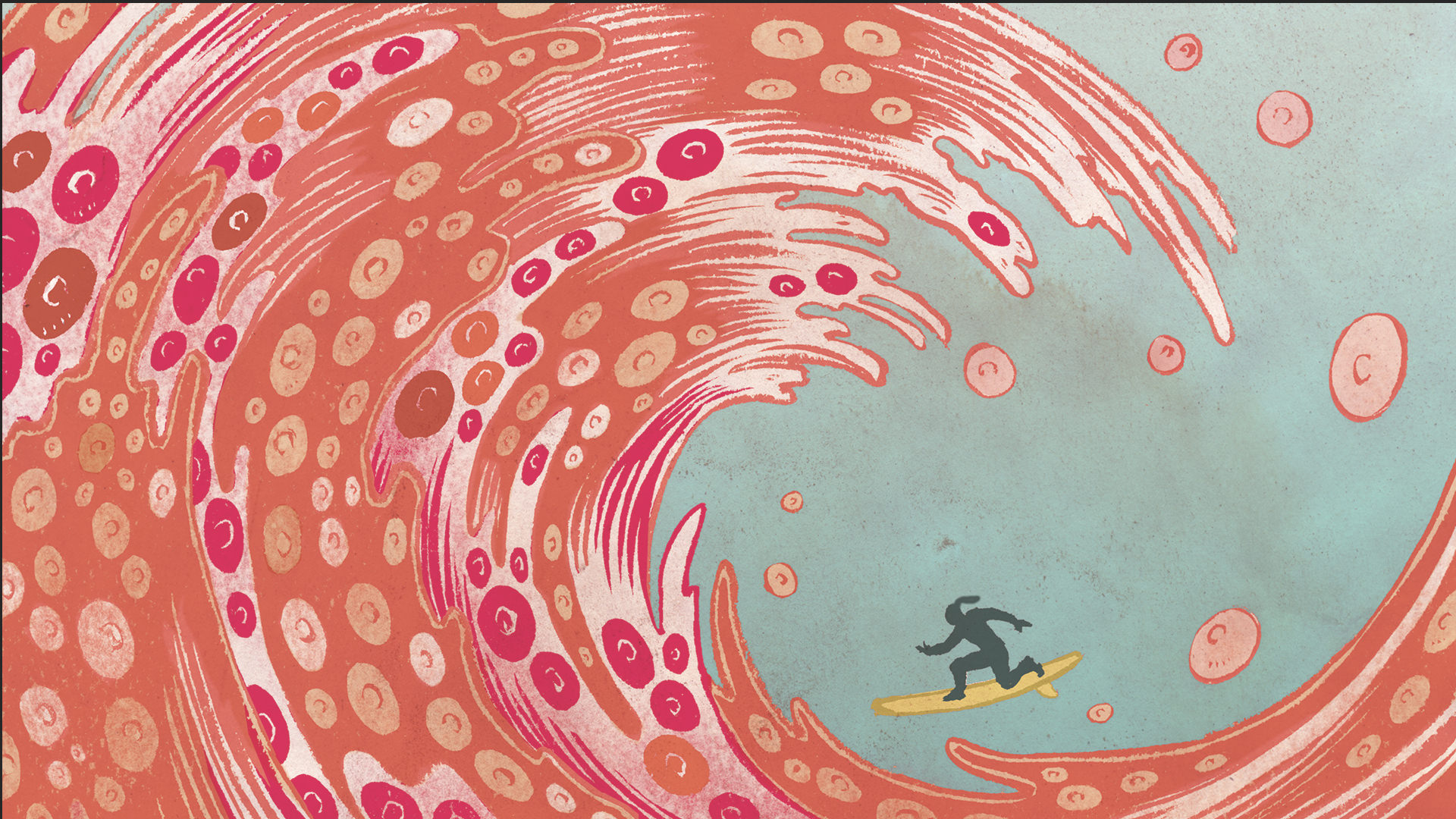 Dana was one of those one-in-18 or so people born with the cosmetically unique but generally non-life-threatening physical anomaly defined by Grey’s Anatomy and other medical terminological literature as polythelia, better known by students of the more street user-friendly Urban Dictionary as a thripple.

A supernumerary or third nipple.

Yet this particular triple nipple (let’s call it Threo), was even more rare than most.  It actually had a mind of its own.

Threo wouldn’t so much resent being the third wheel, so to speak, if it weren’t for the fact that Dana lived in Lancaster, PA.  If you know your United States geography at all, you know that Lancaster, PA is nowhere near the beach.

Threo had a thing for surfing, the original kind that takes place on water not online.  Threo wanted to be a thripple on a surfer.

So, since surfing on the east coast was too seasonal and cold most of the time (a concern for any extra-sensitive body part), Threo the thripple decided it would be best to head west.

Threo figured a thripple could find comfort in California, and even use it as a launching point to more exotic points, like Hawaii, Samoa or even Tonga.

The only question wasn’t how Threo would get there but by whom.

A thripple on its own is almost as conspicuous as it is when three’s a crowd.  And a nipple of any sort can’t simply catch the next Amtrak or Greyhound by itself.  Like a burr that needs to stick to the hide of a boar or the side of your pants to migrate from one place to another, it needs a ride from some body.

So Threo began to plan not just an escape but a transfer, if you will, from Dana to other carriers, placing faith in the Six Degrees of Separation principle that he was just a supernumerary handful of people away from Laguna or Malibu.

Threo’s journey may lack some of the life and death consequence of the great wildebeest migration across the Serengeti, but it would not be without drama.

The first opportunity came the next morning at Dana’s office, when Threo overheard Dana’s colleague, Frank, ask for the revisions to his new business presentation in Chicago later that week.  As Dana delivered the new document, Threo slipped out the sleeve of Dana’s shirt and onto Frank’s receding hairline.

Having spent years in the vicinity of Dana’s armpit, Threo found its new liberation exhilarating.  It was the location that left a little to be desired.

So during the rest of the morning, Threo, seeking a more prominent position, ever so slowly inched forward onto Frank’s forehead before “settling in.”

It wasn’t until Frank was washing his hands after a trip to the men’s room that he even noticed the new addition to his face.

“What the hell?” Frank asked himself out loud.

That night, Frank showed his wife the unwelcome visitor on his forehead.  “Maybe you were bitten by an insect,” she said comfortingly, though wondering herself what species could provoke a reaction that profound.  “Maybe a spider.”

Frank hoped that the bite would be gone before his trip to Chicago, but that morning when he awoke, it was every bit as prominent.  During the flight, Frank made repeated trips to the washroom, praying that perhaps the sexy brown bug bite on his forehead might miraculously disappear.  But Threo was there every time, jutting out proudly.

The cab ride was no less angst-ridden.  Instead of reading through his part of the presentation, Frank peered over the front seat and into the rear-view mirror numerous times, only to find the little tease or the big cabbie staring back at him.

The clients made hair care products, so naturally, many in attendance at the pitch were women.  Frank was self-conscious as introductions were made, feigning a bit of a salute to each in an effort to obscure the mystery areola and appurtenance now demanding attention above his brow.

During his presentation, Frank managed to gather himself enough to deliver his figures and data competently, but Threo’s presence still distracted so that he answered one client’s question with a “Yes, mammary,” and concluded his section with a promise that “We’re going to give you all of our breast people.”

However, Threo, though enjoying the attention and ringside position for all of the action, had an agenda other than to humiliate Frank.

Helene, the marketing consultant for the company, lived in San Francisco.  She would be catching a flight home that evening, after which she’d make her recommendation to management.  Threo knew that as much as it would pain Frank to mingle with the new business prospects one moment further, he’d have to in order to stand even a fighting chance of winning.

When the two sides rose from the table, Threo prepped for Transfer #2.  Frank walked over, shook Helene’s hand and gave her a business card, little knowing that somehow during the exchange, he had also given her a thripple.

On the way out, Frank stopped once more in the men’s room, relieved that the meeting was over.  This time it was to relieve himself rather than check on his unwanted guest.  Yet when he looked in the mirror, Threo was gone.

Hallelujah, Frank thought.  He may not win the business, but at least he had lost whatever it was on his forehead that almost needed a training bra.

Meanwhile, Helene was on her way to O’Hare and a flight that would take her back to the Bay Area.  It would be Threo’s first visit.

And her back is precisely where Threo set up camp.  It wasn’t worth the risk to be a conspicuous thripple with someone as savvy as Helene.

Besides, Threo didn’t plan on sticking around for long.  As nice as it was to already be on the west coast, Threo knew that even in summer water in northern California could give a thripple goose bumps.  Another 400 miles south would be the ticket.

And that ticket would come about through another ticket — to a baseball game.  Helene’s 16-year-old son, Gavin, was an avid Giants fan.  That weekend, the Giants were hosting their hated in-state rivals, the Los Angeles Dodgers.  As expected, and much to the chagrin of Gavin, many in attendance at the series would be tanned, botoxed, liposuctioned, jet-setting Dodger fans.

During a good luck hug between mom and son prior to Game One, Threo made Transfer #3, sort of blending in with Gavin’s rather prevalent acne.

When a fight broke out after a group of the Blue backers started a chant of “Barry sucks,” Gavin was the first in the middle of it, serving as much as a peacemaker as a defender of the Giants’ home turf.

That’s when Threo made Transfer #4, into the ample silicone-enhanced cleavage of the platinum blond girlfriend of the lead Los Antagonist.  Though it was a tight squeeze, Threo managed to squirm down between each artificial orb until reaching a shady, Raffy American Gypsy-scented area beneath the left one.

The next day, Blondie auditioned for a role in a beer commercial.  In it, she would have to play a lifeguard saving a guy surfer from choosing the wrong beer after a particularly rough day in the waves.  The guy would really have to surf, so he couldn’t be just an actor.

The lifeguard role came down to two choices, Blondie and Sabina, a woman with more “natural” physical talent.  The surfer role was already won by Willy, a Philly-born transplant who grew up skateboarding and now spent all of his free time surfing the stretches between Malibu and Marina del Rey.

Threo figured that Blondie would win thanks to her surgeon, until it was revealed that hers was also a speaking role.  While holding Willy in her bosom, she asked the casting director, “What was the line again?”

That’s when Threo made Transfer #5, to Willy, the sixth body in his Six Degrees of Separation.  A surfer’s body.

When Willy took off his T-shirt for the first shot, the director noticed what appeared to be a large brown mole in the center of Willy’s chest.  Moles in the right place worked for sex symbols like Cindy C, Janet J and Madonna.  But not for surfers named Willy in a beer commercial.

“What’s that? the director asked, pointing at Willy’s chest.  “Looks like an extra nipple.  You know, a thripple.”

“I dunno,” Willy responded.  “It’s been there ever since the audition.  Must be some cooties from one of the cuties.”